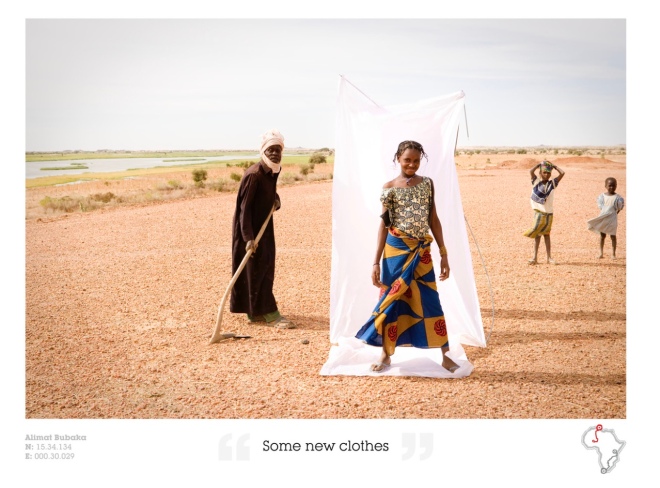 Go to: https://www.insight-visual.com/paul-exhibition.html and look at Paul Close’s environmental projects. Analyse his visual style and consider whether his images work as documentary photographs and, if so, why.

For his ‘Snakebox Odyssey’ project, Paul Close travelled across Africa on an old motorcycle and made photographic portraits of the people he met along the way. Travelling by motorcycle without a support team meant Close had little space for equipment, however, he decided to use an old spinnaker sailcloth as a backdrop to isolate his subjects from their surroundings. This simple yet effective strategy meant that the photographs were suddenly elevated from simple snapshot to something more formal and serious which would affect the way the people posed, with subjects often assuming a regal, neat and dignified way of standing. Likewise, those witnessing the image making, who Close often includes in the portraits, showed a great deal of respect, especially to the people chosen to be photographed, allowing a “subtle kind of red-carpet moment” (Close, 2015) Close also asked each person photographed one simple question: ‘is there one thing that could make your life better?’ This was something he expected would reveal unexpected differences between the people photographed, instead, he found the answers showed common humanity rather than differences, they were answers that anyone could identify with – a better education for their children, better health or a more successful business.

One of Close’s aims was to produce a body of work that challenged presentations of Africa perpetuated by imagery of war and famine. The presentation of the images is key. First of all, the use of the white backdrop is a simple yet effective conceptual device that succeeds in isolating the subject from the background while allowing a view of the environment to be included which gives context. There is a definite difference between the people photographed and others in the frame which combined with the stylistic use of the background which isolates them for the viewer. This also draws attention to the act of picture making and deliberately separates the images from a snapshot or candid aesthetic. Each image is captioned in large quotation marks with the subjects answer about what could make their life better, the subjects name and the location is shown using the GPS coordinates. Importantly, this roots the images in a specific location by adding tangible data while not specifying this so the viewer is not led by preconceived ideas about the country and its people.

I find the series deceivingly simple in approach and a convincing documentation of the individual people and places Close encountered during his project. I admire his approach and the fact that the end result of his series was at odds with the preconceived notions he set out with – instead of finding difference he found a common humanity. The stereotypical representation of Africa that Close does not want to emulate or perpetuate, of poverty and suffering, often rely on sweeping generalisations. For me, the greatest success of ‘Snakebox odyssey’ is my ability to identify with those subjects as individuals and feel an empathy towards them while simultaneously recognising that their existences are significantly different to my own. I find this ultimately uplifting and refreshing – to identify with these people as closer to me rather than other.

This site uses Akismet to reduce spam. Learn how your comment data is processed.